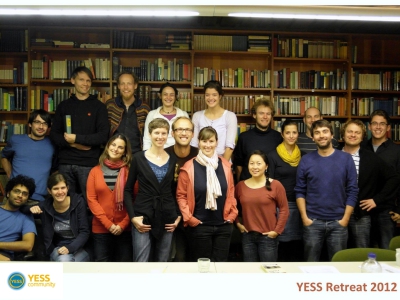 Participants of the first YESS Workshop 2012

The first YESS Retreat turned out to be one of those great occasions where both productive work and the enjoyment of the company of our fellow scientists converged. Funded by CliSAP, 18 YESS members from a variety of institutions (MPIMet, CSC, University of Hamburg, PIK, LMD, LSCE and MPIWG) met and discussed in a pleasant and stimulating environment in “Haus Emsen”, located just 15 km south of Hamburg. We used this opportunity to concentrate on one pivotal question: the role and importance of communication of Earth System Science.

Earth System Science communication is a topic that rarely makes it into the daily routines of our respective research, yet is highly relevant, with respect to not only how our profession is being perceived from the “outside” but also what role we should strive for: increasing knowledge of the Earth system for everyone! We formed three working groups, each addressing a specific question. Here is what each group accomplished:

What do (lay) people really understand when they talk about climate science? The task for this group was to design a questionnaire for polling lay people either on the street or via an online survey on their respective understanding of Earth system science and its implications. The focus is on “scientific understanding” in contrast to other options such as  impacts, personal life choices, policy options, etc. The rationale was that for us as scientists, an idea of the public’s understanding of Earth System Science should be the starting point in any discussion. The general idea behind the questionnaire approach was to find an active means for empirically investigating a general state of knowledge on global change issues and to identify problematic areas of knowledge transfer.

The questionnaire is still under peer review in the YESS community. We will publish the final version soon and ask everyone to participate by filling in the questionnaire.

A professional engagement with mass media or news sites is a critical issue in terms of getting scientific output of our field across to a general audience. We studied two ways in which we might improve the comprehension and reception of our science and its results. One was to create a simple allegory or cartoon that could readily convey the meaning of one of the more abstract concepts within Earth system science (in our case: climate variability) or editorialize a popular climate skeptic myth. The second one was to follow the various pathways of climate facts from a scientific publication to the broad public. Analyzing case studies, we identified at which stages facts get twisted most easily – and how the risk of misrepresentation of our work could be reduced.

Most obvious is the urgent need for better training in communication techniques and a mutual “calibration” of scientists and the press offices in their respective institutions. Yet what also became clear in the graphic depiction is the fundamental difficulty in conveying central issues and points of our science. Drawing good analogies are a hard task when it comes to the technical matter of our profession.

The Climate Model in school

We developed a lesson for climate scientists who are invited to a German high school (grades between 13 and 18 years) to hold a lesson in German on the functioning and methods behind climate modeling. This task involved the creation of a comprehensive yet manageable narrative, essentially balancing out simplification and the complexity of the subject. This example lesson would fit in any natural science unit.

It is a precondition that pupils have heard about climate change and of some simple physics equations. From that we develop a simple model that will be extended to include Earth system processes – basically creating a succession of modules the class can follow in stages in order to gain a basic understanding of from where the facts and figures of climate prediction originate.

We  plan on refining the modules in cooperation with teachers, and finally live testing it in front of a class. Before giving the class it is recommended to talk to the teacher about the preconditions to make sure that the lesson has the right degree of difficulty. This example lesson is meant to be a tool kit for climate scientists invited to give a lesson about climate modelling.

If you would like to have more information on the results of the different working groups and follow-up events of the first YESS Retreat, please contact us