Because we are Earth System Scientists and familiar with the global warming debate we might think we are prepared to argue with climate change skeptics. Even if we know the major driving mechanisms and the details of the climate system we might run into difficulties when arguing. Usually the believes on “the other side” are strong. Your arguments are simply overheard, countered by pseudo-facts or drawn to another level, leaving a scientific debate.

For that reason, the workshop was a nice opportunity to either slip into the mind of a skeptic or to defend scientific consensus and to get an idea of what many scientist awaits if they go public. In several one-to-one debates each of the thirteen participants has the chance to debate vis-a-vis about common climate skeptics arguments.

The public mock debate in the afternoon was then a test for our learned skills. In front of about 50 guests we have had a panel discussion with six workshop participants three of them representing either a believer or denier. Here it was not so much about convincing the other side but the audience. The debate was intense, last but not least fun, and it had a surprising progress.

For more information please log in or register if you haven’t done so. 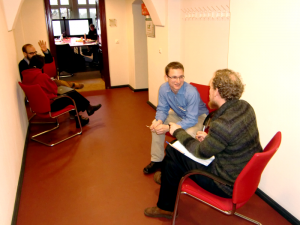 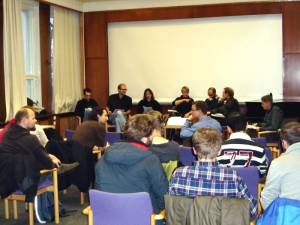 Here are the experiences from our six contestants (Can you guess who played the skeptic and who the defender?):

[quote author=”Klaus” image=”” w=”” h=”” image_align=””]First of all I did not want to participate in an open debate but was glad I did so in the end for a couple of reasons. First of all, I unexpectedly found that I was quiet nervous although the environment was friendly. This might be due to the feeling that it is some kind of public test. You want to convince the other side with knowledge and facts but have to formulate it simple and, most importantly, don’t make mistakes. I also know now,  that winning such a debate in the sense of convincing the other side  is almost impossible (depending of course how stiff they stick to their believes). All one can try is to get the audience on one’s side but this is not an easy task and involves good arguing of course but also a good portion of psychology – maybe humor would help too. All in all I feel a little bit better prepared to talk to skeptics now but also know that I would not engage in such a debate with 50% skeptics for real although I had fun with the mock debate in the end.[/quote]

[quote author=”Christine” image=”” w=”” h=”” image_align=””]Recapitulating what sitting on the podium ‘did’ to me the first which comes to my mind is that I completely forgot the audience. And the audience is crucial for having any success at all in this kind of debate. The other experts one will not be able to convince but there might be someone in the audience who still has an open mind. This is the person one should address.[/quote]

[quote author=”Marianela” image=”” w=”” h=”” image_align=””]The YESS climate skeptics workshop and mock debate was very instructive. We stepped out of our daily research to analyze the bigger picture of climate change, and got to know the arguments of skeptics and how to respond with scientific facts.[/quote]

[quote author=”David” image=”” w=”” h=”” image_align=””]At first I thought it would be really hard to play the role of a climate skeptic, since I wasn’t convinced by any of the skeptic’s arguments and I knew all the counter-arguments. But being on the podium actually was very easy, as was the arguing. Pulling out not one, but several skeptic arguments, brought the  defending climate scientists in a position where they had to do many complicated explanations.
As a skeptic one can just wait until the defendant reaches a point that is not a hundred percent clear, or a catchword that can be turned against him, bringing that person in a situation where even more explanations from his side are necessary.[/quote]

[quote author=”Valentin” image=”” w=”” h=”” image_align=””]Discuss with climate skeptics? No problem if we are patient and reasonable because we are on the right side… is what I thought. But during the workshop and the public discussion we became imposingly aware of how easily you can are pinioned against the wall by the climate skeptics polemics despite all your intriguing argument. An exciting and last but not least funny experience![/quote]

[quote author=”Mario” image=”” w=”” h=”” image_align=””]Being a skeptic is much more easier than what I have thought. You don’t even need to be irrational. Just stick to your arguments and despite their knowledge the scientists cannot keep up with your speed of raising doubts about climate science. The workshop was great for a one-to-one debate, but the public debate showed me that I will avoid to participate in any such “real” event.[/quote]

Some useful links and materials

For more information about the workshop and the public mock debate, feel free to approach Jascha.