Workshop dedicated to the topic of communicating Earth System Science research to a general public and within different climate research communities. 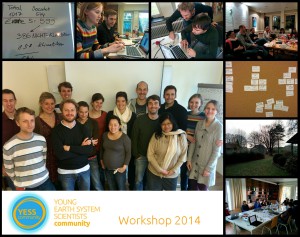 Topics of the workshop:

1) We applied and evaluated the “Earth System Science questionnaire”. This questionnaire was developed during the last YESS-retreat 2012 and aims to evaluate what people really understand when they talk about climate science. Before the workshop, we launched the survey by distributing the questionnaire via several mailing lists. More than 500 people – scientists and non-scientist – participated. During the workshop, we started to evaluate the survey, explored the survey results and came up with several possible measures for the quantification of Earth system knowledge. Further analysis of the survey results is work in progress.

2) We developed a common terminology unifying different notions for uncertainties used in different fields in climate science. We came up with a first version of a glossary: “YESS: Earth System Science uncertainty concepts, Figures and glossary”, which will be further extended and sharpened.