The climate symposium in Darmstadt was the attempt to map the ongoing research activities within WCRP on the projection of future space-based research. The double-logo “Climate Research and Earth Observations from Space” and “Climate information for decision making” captures both ideas of the workshop: to shape the future of space observations and at the same time, wrap up and destil the core essences of today’s climate information. 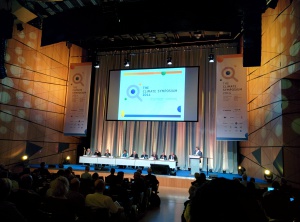 The early career scientists (ECS) program was very extensive, due to the massive involvement of the WCRP who co-hosted the conference together with EUMETSAT. YESS was invited to help organize this ECS program for the first time, and our activities at the conference were therefore quite extensive as well.

We met all early career scientists already monday morning before the conference started and throughout a series of ECS coffee break talks we had many opportunities to foster exchange. Those talks were initially quite formal but adjusted to become more interactive and were a great success overall. During those coffee breaks, two high profile senior persons from the sessions before or after gave small input talks to the ECS crowd and were available for questions and answers. One specifically great coffee break involved an artist and some discussions on the potential future of the Earth. Additionally, there were two meetings exclusively with the early career scientists on Thursday, one for lunch and one for dinner.

During those meetings we discussed the future of YESS and the WCRP early career activities in general, as well as our perspective on the conference. YESS was then invited to give a short presentation on this feedback in the final discussion session on Friday morning. We consider the overall involvement of early career scientists and interaction opportunities to be exemplary for future conferences and hope that we will be able to work on the lessons learned in Darmstadt.

Some information can be found in two presentations, 2014_Yess_darmstadt, 2014_yess_cs2014_finalstatement_clean.